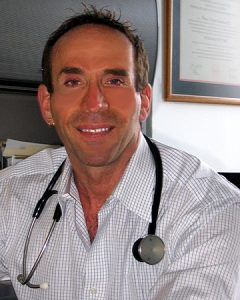 At age 25, Rashbaum was a third year medical student. The year was 1982. Having attended medical school at Boston University, Rashbaum was working at Boston City Hospital when he encountered his first HIV-infected patient. The patient died within 24 hours from pneumocystis pneumonia (PCP). After receiving additional training at the Washington Hospital Center’s Internal Medicine Department, Rashbaum started his practice at a clinic for the dependents of the Armed Forces. A year later, Rashbaum began private practice, initially as a house call doctor, seeing homebound patients. He would visit patients in hotels, even see patients who were performers or musicians at their performance venues. His practice grew by referral and Rashbaum was able to open an office-based primary care practice in 1987.

Being a gay physician working in an urban environment and seeing a large number of gay men in the 1980s naturally led his patient population to include large numbers of HIV-infected individuals. Rashbaum lost a staggering 2,000 patients in the first decade of HIV. In the second decade of HIV, Rashbaum lost only ten. The tremendous HIV-related mortality rates in the 1990s were devastatingly sad for Rashbaum and he even stopped working for a short period. However, Rashbaum says the successes of the 21st century are “astounding.”

Today, Rashbaum is in private practice with Capital Medical Associates in Washington, DC. There are two physicians on staff and one nurse practitioner. They have 11 additional staff to run a busy Internal Medicine/HIV practice that also does travel medicine and participates in clinical trials. At Capital Medical Associates they typically see anywhere from 12 to 20 patients each on any day and their patients are representative of the demographics of Washington, DC with approximately 50 percent women and 50 percent men. Over the last ten years the demographics have not changed much. The Internal Medicine/HIV practice comprises 80 percent of the practice. They take care of nearly 700 men and women living with HIV. Approximately 40 to 50 percent of their HIV-infected patients are over the age of 50, many of them having been Rashbaum’s patients for over 20 years. “The successes in having my patients grow older with me in good health is all the reward one could ask for after losing many patients, friends, and a partner,” says Rashbaum, adding, “The greatest obstacle today is coming from the Affordable Care Act and the insurers. It has made it so, for many, it is financially not feasible to get good health care.”

Rashbaum says it is not difficult to motivate his patients to adhere to their treatment regimens with today’s single tablet regimens. The majority of medications today are dramatically more tolerable than the 15 to 20+ pills that many took in the 1990s. Also, knowing that HIV is a chronic disease like hypertension, and that it is manageable, makes it easy to convince people to that their medication. Rashbaum always calls his patients with their test results, so “no news is good news” is not his modus operendi. In some cases, he does not receive the lab results promptly, so his patients know that if he does not call them within a week, they are to call him so he may contact the lab to send the report that failed to come in time. Says Rashbaum, “I always treat my patients as if I was treating myself, prescribing medications that I would take if I needed to, not being so rigidly adherent to guidelines but using them for guidance. I am willing to not just prescribe medications on label, not that I am reckless, but we all know that some medications will treat some conditions that they have not been given FDA approval for just as well as those approved for that particular indication.” Rashbaum considers himself uniquely fortunate to have been a primary investigator for all the drug trials that were responsible for getting a particular drug approved. It allowed him to get his patients cutting edge therapies sooner.

Rashbaum is hopeful to see the day when HIV is cured and envisions, in ten years, HIV care providers will be treating older men and women with HIV who also have many other co-morbidities that afflict older people without HIV. “Before, we only saw our patients with HIV die from HIV before they were blessed with age. Now everyone gets older.”

Outside of his practice, Rashbaum owns a farm on the Eastern Shore of Maryland. He claims the land did not start out as a farm but he is now a gardener extraordinaire. He has planted nearly 50 fruit trees and vegetables of all varieties. He likes to bring in some of his bounty to the office for his patients to take. In addition to fruits and vegetables, Rashbaum often brings his dogs to work and his patients like the comfort they provide.

As for why he is an AAHIVM Member, Rashbaum says, “I am an Internist. So I didn’t have that avenue for intellectual intercommunication about HIV as did many Infectious Disease doctors through IDSA. Also, it is a nice, positive confirmation to credential as an HIV Specialist™ with the Academy and receive that certification that we are board certified as HIV Specialists™ by AAHIVM.”