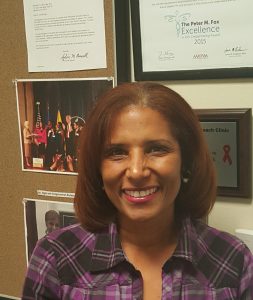 With a population of a little over 15,000, Henderson is situated in the northern part of the state. Here, Warren-Vance Community Health Center, Inc. (WVCHC) is a rural clinic located in a Medically Underserved Area (MUA) and Health Professional Shortage Area (HPSA). The rural service area comprises six extremely impoverished counties with high disease burden and staggering numbers of the population living in poverty. The clinic is a dedicated HIV clinic and is the only HIV specialty clinic within a 45 mile radius. All clinic services provided at WVCHC are based upon a team management approach to address the medical and psychological needs of each patient. The clinic is staffed by one full-time Infectious Disease physician, one part-time DNP (working one clinic session per week), and one PA-C (working one clinic session bi-weekly). All providers are certified as HIV Specialists™ through AAHIVM. As such, WVCHC has achieved AAHIVM’s Peter Fox Excellence Award, presented to practices where all eligible practitioners currently hold an AAHIVM Credential. The clinic is fortunate to have a full-time Ryan White fiscal manager; a full-time RN, in house phlebotomist; medical and non-medical case manager. The team is rounded out with a full-time case manager supervisor and receptionist/administrative assistant. Newly added to the clinic staff is a certified social worker.

Dr. Ogle attended Wayne State School of Medicine and completed her residency and Pediatric Infectious Disease Fellowship at Children’s Hospital of Michigan and initially treated infants and children with perinatally acquired HIV in the late 1980s in Detroit. During her fellowship, Ogle trained alongside adult ID physicians ultimately transitioning into adolescent and adult care. She has been caring for infants, adolescents and adults for about 30 years now. Over the course of her career, Ogle has worked in an urban medical center and community hospital/suburban settings in Michigan before relocating to North Carolina. Since 2001, Ogle has worked in rural North Carolina as Director of a Ryan White funded HIV clinic, providing medical care to adolescents and adults.

The rural location of Ogle’s current practice at WVCHC makes it uniquely positioned to think outside the box in creating programs that may encourage patient participation in their HIV care. Approximately one in five North Carolinians lack access to enough food to eat. Since 2013, when food stamp benefits were slashed, they’ve seen an increase in the number of clinic patients who are food insecure. The Clinic Food Pantry was started in 2014 to help provide basic dietary needs for their patients living below the poverty level. A dramatic improvement in viral load suppression and compliance with medical visits has been sustained over the past 4 years. WVCHC also hosts a “Trans-Clinic” for their trans-female patients. Patients are encouraged to bring a partner and free HIV testing is offered along with lunch, a medical visit, and “girl talk” which is very welcomed and appreciated by patients as well as the medical staff.

In Ogle’s service area, ethnic minorities are the overwhelming majority (86%), and access to health care is a serious problem for them all. Of her patient pool, Ogle says, “About 30% of our patient’s lack health insurance and 32% receive Medicaid. The percentage of the service area population living 200% and below poverty level is a staggering 40%, with 20% at 100% FPL according to the most recent US Census data available. In the catchment area, adolescents (age 13-24) composed 4% of the HIV-infection rates for 2014 and this rate has remained steady through 2017. However, in young adults (age 25-29), we noted an increased HIV infection rate from 29% to 33% during the same time period. The adult population (age 45-64) has risen to 57%; similarly, individuals over the age of 65 has increased to 8% over the same time. The clinic has expanded to provide comprehensive medical care to a growing trans-female population. In addition, our young gay men population has grown and represents about 25% of our total clinic demographic. Each provider sees about 10-15 patients per session and each patient also meets with a case manager to assess any barriers to care.”

Says Ogle, “I’ve always had a special interest in the diagnosis and treatment of sexually transmitted infections in children. In the early years of HIV (GRID, HTLV3), I cared for infants who basically became part-time residents of the Infectious Disease Unit at Children’s Hospital in Detroit. These babies often lived with other family members because their mothers and fathers were too sick or died from the virus. There wasn’t much we could do for these precious angels until 1990 when AZT became available for treatment in infants and children; AZT also made these babies so sick. It was gut wrenching holding and caring for these babies who looked like me, or my children, and literally watching them die or giving them medication that made them appear worse. I made a promise to those babies that I would remain in this fight until no more babies or children were dying from HIV disease. Little did I know that 30 years after the initial description of the disease in North American gay men, the global community faces re-emerging and newly documented HIV epidemics in young same sex loving men. There is a clear need to improve meaningful, comprehensive and effective HIV prevention efforts targeting young men of color, particularly those living in the south.”

“We must acknowledge the role stigma and structural racism within the healthcare system plays in the willingness of young gay men of color to seek prevention and treatment. Children and youth of color continue to be at risk for exposure and infection with HIV. Despite the many challenges that exist in providing care in the rural south, as an African American physician, a mother and advocate for children, I feel a personal obligation to continue fighting against the spread of HIV disease.”

As for what she finds most rewarding about her work, Ogle says, “It is the honor of being involved in the intimate lives of my patients and having a positive impact on how they see themselves and their future. In many ways, African Americans are bearing the brunt of the HIV crisis in the US. As an African American physician, I feel a strong responsibility to be a visible advocate and do my best to help reduce disparities in HIV infection among our rural women, young men and transgender people of color. As an advocate, I enjoy the privilege to support and promote the rights of my patients in the health care arena.”

Ogle motivates her patients to be adherent to their treatment regimens by encouraging them to actively participate in their care plan. Providing education and emphasizing the consequences of non-adherence is key in understanding the importance of complete viral suppression. Ogle says, “It is extremely important to recognize barriers and patient’s medical literacy in setting expectations for adherence. Addressing hunger, lack of housing, stigma and access to medication are just a few of the hurdles our patients must get over to achieve adherence to their regimen. We become partners in dealing with these challenges so patients don’t feel alone, making the relationship a shared responsibility in achieving adherence.”

Looking to the future, Ogle would like to see universal access to healthcare for all Americans. Says Ogle, “It is gross irresponsibility and negligence that 17 states currently refuse to expand Medicaid under the provisions of the Affordable Care Act. Of these, the majority are in the south leaving millions of Americans without access to quality, lifesaving medical treatments. The median family income for people living with HIV/AIDS in Vance County is about $15,000, qualifying many of them for Medicaid. In North Carolina, however, Medicaid is available only to the disabled poor. With exceptions, such as pregnant women, individuals over 18 years of age living in poverty but without a Social Security Administration disability determination are not eligible for Medicaid. More importantly, these patients do not have enough money to afford insurance even with the federal subsidies. North Carolina legislators voted to not allow state based marketplace insurance exchanges. The result is only two insurance company with marketplace plans. These plans are expensive and are not options for our uninsured patients with such low incomes. These legislators do not care about the HIV epidemic and how it negatively impacts the citizens in the south who are also their constituents. I am not hopeful that this bleak picture will change anytime soon because of hyper-partisan politics and profit driven insurance companies.”

Ogle continues, “HIV care in the US is severely challenged. Low reimbursements, improved outcomes resulting in an increased number of people living longer with HIV, increases in diagnosis among specific populations like young black men and transgender people, and increasing care complexity are leading to clinician shortages. Access to antiretrovirals through Medicare/Medicaid is worsening, and restricted formularies among private insurers is on the rise. Affordable health insurance is not available for thousands of poor Americans living in the southern, Republican-led states due to continued political opposition to and dismantling of the Affordable Care Act. The stubborn refusal of these same legislators to expand Medicaid further restricts access. Without Medicaid expansion, 30% of our patients who would have qualified for Medicaid will continue to be uninsured and require Ryan White funded services. At the same time, recent trends in HIV epidemiology, pathogenesis and care services have reinforced the need for multidisciplinary teams to deliver care. HIV advocates have a serious challenge to ensure that the gains and lessons learned in HIV care from the past are not lost in the transition to national health reform or suffer tremendous setbacks due to lack of financial support.”

Dr. Ogle was appointed to the President’s Advisory Council on HIV/AIDS under the leadership of ONAP Director, Mr. Douglas Brooks. She along with 5 other members, resigned in protest of the current administration’s stance on Medicaid. She serves as President of the Board for the Central Children’s Home in Oxford, North Carolina. Founded in 1883, it is the second oldest Children’s Home in the state and the oldest black home in the US. She feels honored to have expanded her passion as an advocate for children to serve an organization whose mission is to provide family-centered services in a residential setting for children who cannot remain at home for a variety of reasons.

Asked why she is an AAHIVM Member, Ogle says, “As an advocate for people living with HIV, I’m honored to be a part of an organization dedicated to promoting excellence in HIV/AIDS health care. AAHIVM is committed to supporting health care providers in HIV medicine and promotes an environment for the standardization of care for those living with HIV. As an Academy Member, I continue to learn from others involved in all aspects of delivering HIV care. AAHIVM provides education and informs its members on policy, advocacy and community mobilization while providing a network for effective communication.”