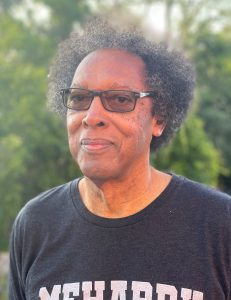 “By far, four of the best years of my life.” This is how Dr. Cathcart recalls his time at Meharry Medical College, a HBCU in Nashville, Tennessee specializing in health care education. As part of his medical training he did externships in Mississippi and Alabama where he ‘delivered’ babies. “Of course,” Ronald says, “the mothers did all the work! I also had the privilege and pleasure of doing an externship in Ghana for one summer.” After medical school, he did his internship and residency in Internal Medicine at the University of Florida in Jacksonville before going into private practice in Fort Myers for about three years in the late 1980s.

“A friend of mine in Fort Lauderdale asked me to come into the health department to treat people living with HIV,” recalls Ronald, “I was not satisfied with private practice and, after about two years of telling her ‘no,’ I agreed to sign on and become a staff physician. I became the medical director of the clinic.”  Dr. Cathcart spent 17 years with the Broward County Health Department treating patients living with and dying from HIV from 1989 to 2006. “It was a lot of heartbreak and tears for a while because, at first, most of our patients (most of whom were young) eventually died. In 1996, things did change: highly active antiretroviral therapy became available and patients started living.”

In 2006, Dr. Cathcart moved to Brevard County and joined Comprehensive Health Care, a non-profit, Ryan White supported, stand-alone practice in Melbourne, Florida; officially called Unconditional Love, Inc. doing business as Comprehensive Health Care. He is still in practice as staff physician here today along with a robust team. “We have a nurse practitioner, four registered nurses (one of whom is the chief operating officer), eight case managers, medical records personnel, one nurse assistant and receptionists, drivers, and assistants to the CEO. The clinic was started by a nurse practitioner who worked at the Brevard County Health Department because there was no non-private medical entity that treated people with HIV in 1991. She and her brother and friend were the first staff of the clinic.”

Together with a nurse practitioner, Dr. Cathcart sees about 20 patients a day and works five days a week. He has about 700 active patients; most (about 87%) of whom have undetectable viral loads. Asked to consider his patient population, Ronald shares, “We have a broad mixture of patients with HIV. Some work, others are retired, many are disabled. We only see adults (18 years and older). Our oldest patient is 91 years old. More than half of our patients are over age 50. The most common risk factor for acquiring HIV is men who have sex with men (about 60 to 65%), followed by heterosexual transmission, intravenous drug use, and vertical transmission from mother to child. A minority include blood transfusion and unknown risk factors. European-Americans make up about 50% of our patients followed by African-Americans being about 40% and Hispanic-Americans and Caribbean-Americans make up about 10% of our patients.”

Dr. Cathcart and his team epitomize the kind of multidisciplinary collaborative approach to care that many practices strive to achieve. He says, “We have a team of people here who could probably make more money elsewhere. However, with all of us working together with and for our patients, they (the patients) seem to have bought into our approach: treat patients like family and show them that we care for and about them. Until the money ran out, we had Christmas parties for our patients and their families. Our goal is to do whatever we can to keep our patients as healthy as possible. We are aware that the patients must do their part every day. We see them about once every four to five months, so during their appointment we do our best to treat them as best as we can.”

Dr. Cathcart tells his patients the secret to having and keeping an undetectable viral load: take your antiretrovirals (usually one pill once a day) as directed. His patients generally take their medications and keep their clinic appointments. “My job is made easier by the drug companies,” says Ronald, “They have antiretrovirals that are friendly, easy to take, and with little in the way of side effects. This way, our patients are generally adherent and that means everything. In the bad old days things were much different and patients didn’t live long enough to suffer from most of the comorbidities. Today, our patients die, not from HIV, but from what I call diseases that could be treated and sometimes reversed by a healthy lifestyle. There is a great reluctance, as I see it, by our patients to adopt changes in their lives that would require action on their part. These changes include diet, exercise, and stopping smoking, drinking alcohol, and using street drugs.”

Looking to the future, Dr. Cathcart believes we will have long-acting medications that may only need to be given once a year or longer, meaning patients may need to be seen less often. He hopes a cure for HIV will materialize one day but has doubts. He thinks preexposure prophylaxis (PrEP) will become more widespread, and hopefully among high risk groups such as young, African-American men who have sex with men. “I am coming to the end of my career,” Ronald shares, “I hope to work as long as possible. I want to continue to see and be a part of progress in the field of HIV medicine and I would like to see more patients (and staff) adopt a healthier lifestyle to avoid preventable diseases caused by poor diet and poor choices in general.”

Dr. Cathcart recently had the opportunity to return to his medical school, Meharry Medical College, after almost 47 years and give a talk to medical staff and students. “I had the opportunity to return to a place where I had the best time of my life. I was welcomed with open arms. Of course, I cried tears of joy. I took pictures with some of the medical students. It was great to return to a place I will always cherish!” Outside of work, Ronald’s life is about family, including his children and grandchildren. “I want to see them all grow to be successful in life. Of course, that success is whatever they think it is. I want to be the best dad and grandpa possible. That means always to be myself and to continue to live as healthy a lifestyle as possible.”

Asked why he joined AAHIVM as an Academy Member, Ronald says “I joined AAHIVM because it was an organization that had the tools to continue to educate me on matters of HIV. I look forward to reading the information in the emails and the challenge of continuing to credential as an HIV Specialist. This organization is truly dedicated to its members in keeping us up-to-date with the latest information in the field of HIV.”